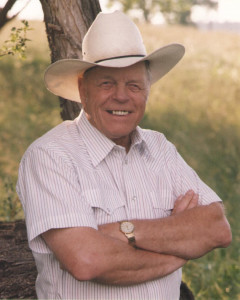 Bob Penfield was born in Lemmon, South Dakota, on December 2, 1930. Besides college and his stint in the army, Bob never lived more than 75 miles from the sod house his granddad built six miles south of Lemmon in 1906.

As a boy, Bob loved to be around livestock, especially horses, and that influenced his decision to get a bachelor’s degree in Animal Science from South Dakota State University.

After returning from the Korean War, he found his wife, Winona, and they bought Home Base Livestock Auction Market in Bowman, ND and operated it for 19 years before shifting their focus to Real Estate, farm, and antique auctions.

Bob knew at age 6 that he wanted to be an auctioneer, following in his father and grandfather’s footsteps. As a boy he’d go to Gramps’ house before school to help with chores and that’s where you’d find him again after school until it was time to go home to sit at the family dinner table with his five sisters. If there was a livestock auction, Bob would negotiate a deal with his teacher to do his schoolwork ahead of time so he could miss school and help at the auction. Gramps rewarded Bob for his work with small shared investments in livestock buying and selling.

Bob conducted his first auction by himself at age 17. Although he did other things alongside auctioning – such as Real Estate broker and appraiser, rodeo announcer, and author of six books – the auction profession is where he poured his time and energy, pioneering many innovations in the auction industry. Bob championed and promoted the auction way of doing business when and wherever he had the chance.

A lifelong learner, Bob was the first ND auctioneer to hold a real estate license and both wrote and taught a course on real estate auctions for the National Auctioneers Association.

Family was always a priority and source of pride and joy for Bob. The Penfields worked together in the family business of Penfield Auctions with Bert as a 4th generation auctioneer, while the girls helped Winona as clerks, cashiers, and ringmen. In their busiest year they held 383 auctions while always reserving Sunday as “The Lord’s Day” for church and rest.

Unwavering loyalty and tireless commitment to his wife, family, church, community, and profession was a deep part of who Bob Penfield was. His 90 years on this earth surely ended with a joyful “Welcome Home” from his Savior.  Bob passed away on December 28, 2020.